By about 11:30 or so we had my trusty Taurus SHO packed to the gills. With 4 full backpacks, 2 coolers, 2 bike racks, 4 bikes, and four passengers, it was loaded. We did happen to catch the blueberry season. We bought a 5 liter basket full of them and ended up eating nearly all of them. I'm sure I got at least 3 of the 5 liters myself. :-) We arrived in Killarney Park that evening about 7:30 and made our reservations for the next 5 nights. Since the park was full that night and we didn't have enough daylight to make it to any of the open back-country sites we drove down into the quaint little town of Killarney and stayed at one of the two campgrounds that's there. We walked the entire town in about 2 hours. Later while reading a local park publication it listed every business in the town in one column. It's really tiny!

We got up early and repacked all our gear. The LaCloche Silhouette Trail is a 100 km trail loop that makes a large loop through the Killarney Park. Since the first leg of our trail would be up the Eastern loop to campsite H51 we only needed a days worth of clothing, food, and supplies. I wasn't familiar with the park so I had expected that we'd only be taking day hikes and could return to the campsite (and car) each night. With that in mind I had prepared a bunch of cooler food like steaks, boiled dinners, corn on the cob, and such. Bad idea. Since our site was only a couple kilometers up the trail I decided to pack all the cooler food into the first day and just lug the cooler along. This did not prove to be a wise move. I've often pitied and secretly laughed at people I've seen out on the trail with coolers and now I will do so all the more. The trail started with a very steep rock hill that we had to scale. Since I was the most athletic person in the pack, I grabbed the cooler and soloed it up the hill. This turned out to be a trend and I carried the cooler almost the entire time. This is the last trip I will ever take a cooler into the woods on.

The trail was much more mountainous that I had imagined by looking at the map. We quickly got accustomed to reading the hill graduations in meters. This is the picture of the day taken high above Little Sheguianda Lake. 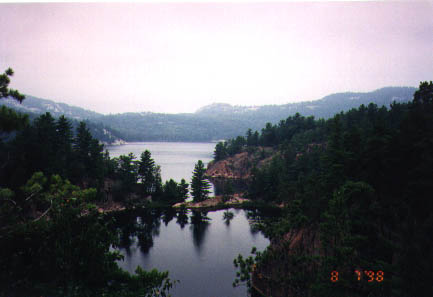 Despite setting a 5km/hour pace the two km hike ended up taking us almost 3 hours to reach camp. Of course, keep in mind that the two km's were only in two dimensions. They didn't count all the vertical travel we did which tends to really slow down the pace. We finally arrived at our site all hot and sweaty and looking forward to jumping into our lake. We were very disappointed when we saw the condition of our lake. It was a backed up beaver pond with scummy water and leeches. We set up camp and then hiked a few km's further East to find a cleaner lake to jump into. We did find a couple more lakes but none clean enough to jump into.

Since it rained during the night we took our time getting around. The sun finally came out, dried things up and bit and after filtering enough water to fill us and out water bottles we dropped camp and hiked out. Once we got back to the car we dropped our packs and jumped into George Lake. The water was great and we played in it for about an hour. Then we once again repacked our backpacks with a few days worth of clothes, gear, and food. We ate most of the remaining cooler food for lunch and gave away what we couldn't eat. Since we had a 6 km hike left before dark we got moving again and started up the Western trail. The hiking there was pretty flat and easy going. We covered the first four kilometers very quickly but got very sidetracked after that.

It was getting hotter so we were really looking for a nice lake when we found Acid Lake. The water was crystal clear and so blue that if you stood up and looked at your feet underwater, they were blue. We'd dive down to pick up blue rocks and come up with white ones. I've never seen Alpine lakes before and we were all stunned by the clarity. You could easily see down 30 feet into the water. The phrase "Clearly Canadian" was heard being uttered many times as we enjoyed the clear blue water. We never made it up to Nellie lake which has 28 meter (92 feet) visibility. 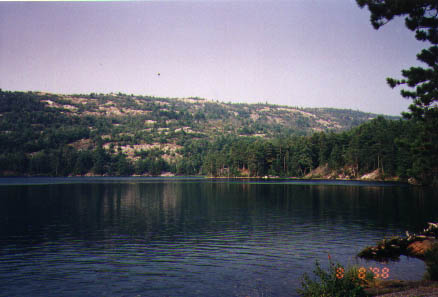 We played in Acid lake for quite a while before packing it up to campsite H6 on Cave Lake. Cave Lake is a standard lake. It had a murky coating on the rocks but was pretty clean. It was plenty clean enough for us to bathe in. It also had these really hungry little fish. There were hundreds of the little buggers and they were really hungry. We had fun killing flies, ants, and mosquitos to toss into the water. Within a second of the insect hitting the water, they'd have it. I about died laughing at them as they'd swim up and try to eat the little hairs on my legs.

Not surprisingly, it had rained again during the night. We'd much rather hike in the rain (it's cooling effect is magnifico) but having the rain cool down the evenings helped too. We once again made a big fire, and had a leisurely breakfast while waiting for the sun to dry off our tents. Here we are dropping camp. 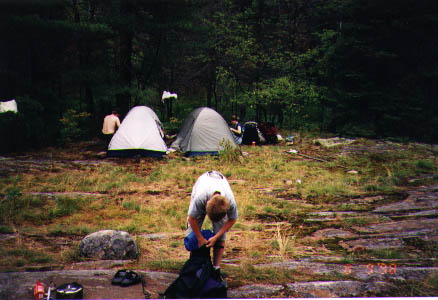 Why, yes those are matching tents! Mike liked mine so much he went and bought himself one just like it. They're Kelty Vortex 2's. They're a very light (2.8kg/6 lbs) two person tent long enough for two full-grown adults to sleep comfortably in. They have a full rain fly with doors on each side and two awnings to pile gear under in the rain.

Once camp was down we set out for H7 on Topaz Lake. It's only about 3 km up the trail but the 1320 meter (4020 feet) elevation is quite the climb. It took us a couple hours to make the hike but we were rewarded beyond measure. The site sits in a coniferous forest just above the gorgeous Topaz lake. Topaz Lake was every bit as clear and blue as Acid lake. It has a two very nice entrances into the lake (on down on the lake, the other being a nice big rock to jump or dive off) which we frequented. Our trip just kept getting better and better. You can't quite get the richness of the colors in a jpeg scan of a 3x6 glossy but here's Topaz Lake: 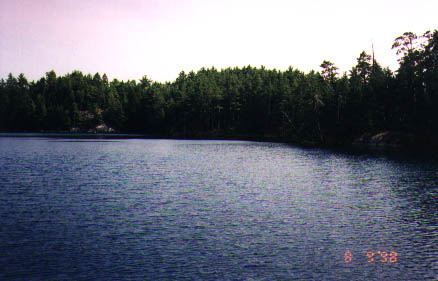 We spend the rest of the day building up flat spots with beds of pine needles for the tents, playing in the lake, and hauling a few dead trees back to camp to burn. For some reason we found lots of dead Maple and not many live ones. It's almost like something came through a few years ago and really took a toll on them. Either way, Maple is a great burning wood and made for some awesome camp fires. Here's the crew roasting around the fire. 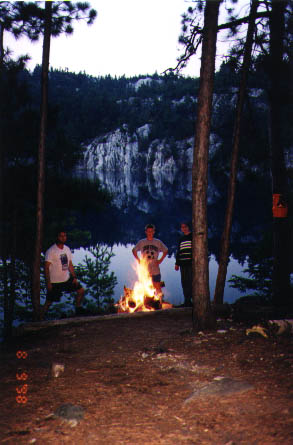 We just couldn't have imagined a better site. There were huckleberry bushes nearby to eat off and chaise lounges built into the rocks but you had to climb a ways to get to them. The rocks are all white marble which makes a comfortably warm place for one to lie down and sun themselves. In the picture above, look at the hill you see in the center of the picture. The sibling to that hill to the left was very climbable and had very nice flat sunning spots. A most fortuitous location. :-) Since the coniferous forests were not as damp and we were up away from any stagnet water we didn't have any problems with mosquitos or flies at this site. This is what we came to Canada for!

By now we were getting worn out. The hot weather, the hills, and the backpacks were taking their tolls on us. The trip back was pretty easy (going down the 1320 meter hill instead of up it) going so we set out for out last campsite, H2. Of course, we had to go past Acid Lake again and it was still very hot out. By the time we arrived at the lake it was a free for all, last one in is a rotten egg, drop your pack, shed your boots, and race for the Lake.

When we got down to H2 we were pretty disappointed. The bottom of the lake was like walking in a cow manure ankle deep and there wasn't any ground to set up your tent. Just nice big non-level rocks. They don't want you to camp anywhere but designated sites but there really wasn't a good spot for one tent, let alone two. We swam for a little bit and then sunned ourselves on the rocks for a while. After collecting some firewood we were all pretty worn out. Mike decided that since H1 wasn't far way he'd bushwack (make a trail) down there and see if it was decent and whether or not it was occupied. Since it was midweek, we figured there was good odds it would be empty.

He took one of my 2-mile sport radios and headed off. Martha and Daniel went back and picked blueberries while I read all about the land we had just hiked. When Mike found H1 he radioed back the good news. It was empty, had flat spots for tents, and nice clean water. We packed up and again and bushwhacked up to H1. Here's a shot from one of the hills we hiked over. 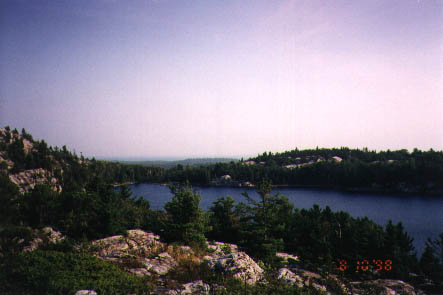 We were getting pretty tired at this point. This was our second longest hike and we were already tired when we arrived at H2. Here's a bunch of faces screaming "Are we there yet?" 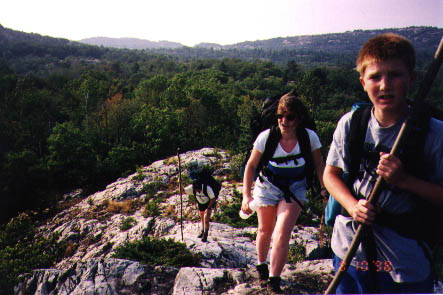 Mike was right, it was a beautiful site. There was a nice big rock formation of white marble with little cutouts to sit or lie in or on. There was several nice high rocks to jump in from, plenty of easy entry into the water, and the water was clean. We hauled a couple nice dead Maple trees back to camp but were too tired to build a fire.

The winds we had prayed for all week started picking up that evening. We watched a most beautiful sunset and then crashed for the night. 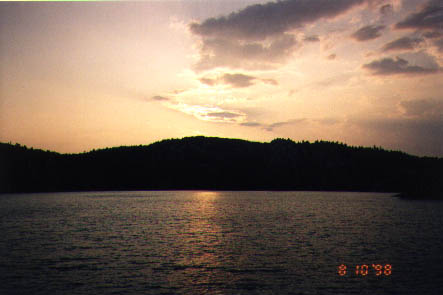 The morning produced a most beautiful sunrise as well. We packed up and headed out for the long drive home. 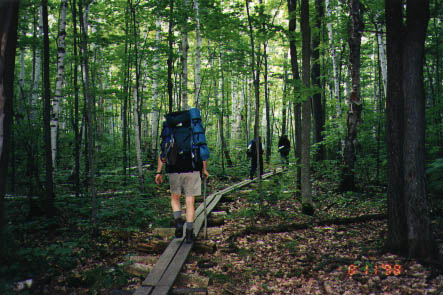 Being away from civilization for extended periods gives one time to reflect on what's really important in life. It's how I recharge my batteries and come back to "normal" life with a fresh perspective. It was a great trip, and I can't wait until the next one. Suggestions?!

Things I'll do differently next time:

Pack a blanket as well as a sleeping bag. The weather was too warm for a bag. :-P
Leave the cooler at home.
Have enough time to do the whole 100 km loop.