Every so often you run into something that you’d like to share with those you care about. I read an article on personal finance that does a great job of summarizing a lot of collective wisdom on the topic. I highly recommend reading it, as everyone I know that practices such wisdom has achieved, or is on the path to achieving financial independence.

Just for fun, I’d like to present two scenarios, the first is of Average American. Average’s family income is about $60,000, the 2003 average (IRS) for married filing jointly. Each month the Average family pays $300 each on two car payments and $900 for their home. They have 2.3 kids and after living expenses, they have just enough left to make the minimum payment on their $2,000 of consumer (credit card) debt. They seem to be doing well.
END_OF_DOCUMENT_TOKEN_TO_BE_REPLACED

To myself, an inexperienced boater, I find the prospect of rogue waves fascinating. Violent water is “typical” in many areas (Cape Horn, Cape Hatteras, etc) and is expected there. There are geographic reasons such as underwater topography, tides, and other factors that create to turbulent water. Other reasons for huge waves is simply weather patterns, particularly storms. Within the class of violent weather is a class of waves known as freak, or rogue waves.

Only recently have scientists begun to understand their frequency, and the more they learn about them, the more light becomes shone on past events. They are closer now to having plausible explanations for things that defy a simple explanation, like the unexplained disappearances of 200 ocean going ships, and the Bermuda triangle. However, there is much still to be understood about rogue waves.

Many scientists believe that there may be as many as 2 to 10 of these rogue waves generated each year. The 965′ ocean liner Norwegian Dawn had just weathered out a storm through the night and as dawn broke and the seas calmed, a 70 foot wave arrived and blasted the ship. The captain of the ship had 20 years of ocean going experience and had never seen anything like it.

Although sailing through the storm may not have been the wisest choice (it tends to make passengers “uncomfortable”), navigating his ship through a violent storm and a 70′ wave with only a couple broken windows to show for it a remarkable achievement. My hearty congratulations to the captain. Many a ship has simply disappeared under such conditions.

Today I ran into a swarm of giant, red crossed mosquitos. They’re a fairly popular variety and appear in waves. I don’t see anything for a couple months and then boom, there’s an entire swarm. They call, they send me postcards, fridge magnets, and when I walk in the door, they swarm around me. They entice me with cookies and flavored beverages. They call me a silent hero. I swear, they’re out to get my blood.

So today I gave them another pint. Maybe it’s because I’m type O Positive (universal donor) that makes them so incessant. They just can’t get enough. Today they invited me to give a “double red” next time. Yeah, that’s right, they aren’t content with just a pint, they want twice as many of my red blood cells next time! I don’t even mind giving them a double tap. What I do mind is that it takes 45 minutes. I can fill a pint in under 6 minutes (average person is 8-12) and get out of there.

I can accept that my blood is the most needed type. A lukemia patient somewhere needs a lot more red blood cells. I understand that, and I’ll help, but where does it end? I give them a pint every couple months and I’ve already offered my organs when I die. What comes after two pints? Do I need to toss in an organ too? Do I get to choose which one I contribute? Have I watched to many Monty Pyton movies?

Do you know someone looking for an iMac but can’t afford a new one? I have a 17″ iMac G4 (800MHz) for sale. I am the original purchasor, as this was Jen’s iMac. It was top of the line with the just released 17″ LCD display, 80GB hard drive, SuperDrive, 56k modem, Ethernet, and speakers. I bumped the RAM up to 768MB and added an Airport (WiFi) card. I did a price search on eBay and this system currently sells between $1,000 and $1,200. This system would lean towards the higher end of that range due to the SuperDrive, extra RAM, and Airport options. It’s a great little computer but it’s being replaced because a faster system is needed.

After arriving home from our trip to Isle Royale I noticed that some items that had been stored on the shelves in my garage were on the floor. This is quite atypical and left me wondering. I placed everything back onto the shelves and resumed normal life, making sure to close the garage service door.

Last night after returning from Persnickety I noticed that once again, several items had been knocked off the shelves. This was quite odd indeed. I placed the items back on the shelves, pulled the car in, and then paused to look around. Lo and behold, I spotted this up in the rafters: 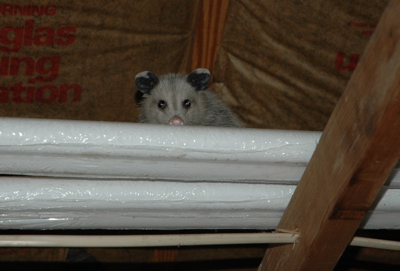 He was fairly docile and seemingly unthreatened by me because he didn’t put on his catatonic act. I took a couple pictures and he didn’t enjoy the camera flash much. I then picked him up and carried him into the house to show Jen. We made him a plate of salad and left him on the back deck, with the garage door closed. If he’s a wise possum, I won’t catch him in my garage again.

I have new become much more familiar with CSS, and boy is it nice. The new design is more attractive, easier to read, and contains far less code to accomplish the same purpose. On average, each page now contains 30% less code.

I had a few problems with the old site design, the most troublesome being code maintenance. Editing pages wasn’t terribly hard, but since I was using tables extensively for the layout, it wasn’t exactly simple either. I would often find mis-typed tags since the majority of the code maintenance is via a text editor (vi).
END_OF_DOCUMENT_TOKEN_TO_BE_REPLACED

It’s been 3 years since I’ve flown out of Traverse City. Today, that aged memory was refreshed, and I once more remember, in vivid detail, why I so often choose to fly out of Grand Rapids instead. It’s really nothing against T.C., but rather because most flights out of T.C. connect in Chicago. Chicago often has weather delays, and once they get behind, it only gets worse.

Upon arrival at Cherry Capital airport, I learned my flight was delayed 15 minutes. I checked in, pulled out the book (The Pelopennesian Wars) I had brought along for just such an occasion and started reading. We got word that O’Hare was completely halted until further notice. The delay grew from 15 minutes to an hour, then two, and we finally left for Chicago at 4:30.

I had since re-booked on a later flight out of ORD which was scheduled for a 4:50 boarding and 5:10 departure. I arrived in ORD at 4:45, checked the gate status for my flight (gate C23, on-time), and then hauled tail across two concourses to get to my plane which would be fully boarded by the time I arrived at the gate.

Upon arrival, I learned my flight was delayed 1 hour 25 minutes. Sigh. So, I decided to call ahead and inform Ricardo & Paulette of my new flight info. I pulled out my trusty calling card and tried to place a call. I was greeted by a, “Sorry, you do not have enough minutes left….” message. This was not a problem I had only to call the 800 number on the back and recharge it.

I called and learned a new and useful fact, calling cards expire. Mine in particular (AT&T @ $0.035/min) expires after two years. I can still use the remaining minutes, but I can no longer recharge the card. This is terribly unfortunate, as I had long since memorized the card number.

My next logical step was to use coins in a payphone, so I traded a $10 bill for some change and tried placing my call when I learned something else new. Some payphones are “local only”. That means that if you happen to be standing in front of one of these phones with quarters in hand, you cannot use this phone to place a long distance call. How irritating. I finally resorted to calling an operator who shared that revelation to me.

After trying a few more phones with similar results, I finally resorted to asking a kind person to allow me place a call with his cell phone.

Once again proving that I just can’t sit still, I’ll be flying west quite soon. It’s a mixed trip, primarily business but there will be some quality time spent fishing on Ricardo’s boat. 🙂

Tim and Carol Garrington (friends in Colorado) just had their first baby! You can see details on their web site.

I have posted some of my better photos to a new “Photo Gallery” section of my site. Please have a look, vote on them and feel free to send any comments my way.