She looks beautiful doesn’t she? 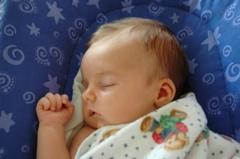 Perfectly innocent, and safe. Not a care in the world, and nothing at all to be concerned about. Well, there are things we’ve learned that are simply too precious not to share, especially since they weren’t mentioned in our Baby Owner’s Manual.

There are certain things about changing a diaper that are intuitively obvious. Chief among these is that leaving certain parts of baby uncovered is hazardous to everything near babies discharge ports. Discharge is normally on the bottom end, but you can’t count on that. Again, this is obvious. However, what isn’t obvious is Day Care Daddy’s first corollary:

Never remove babies diaper within 5 minutes of any activity near the babies bottom.

There have been numerous “events” that have led us to draw this conclusion, but I’ll share one of my favorites. While Ricardo (grandpa) and Paulette were here, we left Kayla in Paulette’s loving care while the rest of us went shopping. This might be something peculiar to Kayla but we failed to warn Paulette that if Kayla does a “download”, immediately going to change her is a bad idea. No sooner than Paulette got one diaper off, Kayla was letting go and discharging more. Several diapers and fresh clothes later, things got back under control. This leads us to Day Care Daddy’s second corollary.

Never change baby on anything that isn’t easily cleaned (or disposed of).

All the evidence we’ve seen indicates that exposing a babies excretion ports significantly increases the likelihood of discharge. Because of this, we’ve adopted a method whereby we leave the old diaper under her until the new one is ready to be slid into place. Thus, excepting a two or three second transfer period, there is always a diaper under her. This has prevented many an incident, and I can’t say exactly how many times I’ve had her discharge into the new diaper before it was installed. However, this practice alone is insufficient to insure against catastrophe. Today I disregarded the first corollary. I did not forget the second, and therein lied my salvation.

Daddy got careless and unlatched her diaper within 5 minutes of a discharge. Two wipes later, her nasty little tail was cleaned up and ready to go into a fresh diaper. In the few seconds after the first diaper was removed, a precious little stream emitted that didn’t stop until the entire disposable changing pad was soaked. These are wonderful little things. They’re just like a painting drop cloth, plastic lined paper that absorbs fluid but won’t let it through.

I wrapped up my freshly soiled bundle (in the disposable pad) and took her directly to the sink with the new diaper still in hand. Ever mindful of the events necessitating the unscheduled bathing, I wasted no time getting her back into a diaper. This brush with disaster was a major accomplishment of the day. Yawn. So concludes today’s issue of “Day Care Daddy”. Stay tuned for more exciting adventures to come.

After my water broke on Friday night, we had a couple of hours before heading to the hospital. We packed our bags and Matt finished baking the cookies. Today evidence was found that yes Matt is susceptible to impending birth jitters. I found the unused cookie dough in the pantry next to the chocolate chips instead of in the refrigerator. Oooops. Obviously a few more important things were on his mind. 🙂

Another milestone in Jen’s pregnancy has been reached. Jen’s bellybutton is now an outie!

We’ve been working away at the house a fair bit lately. Nearly all the drywalling is done and we’ve finished up all the mudding and sanding. How do you know if you’ve been working with mud for too long? We’re not sure, but we figure it’s at the point where you begin looking for holes to fill that aren’t in the wall.

We’re in the home stretch now, all the walls are finished. Nearly all of them are primed and a few are painted.

A city fellow was invited to spend a weekend at a friend’s farm. Several things were new to the city fellow, but the strangest thing he saw was a pig with a fancy artificial limb. When asked about it, the farmer replied “That is no ordinary pig. Last year our house caught fire while we were sleeping, and that pig knocked his snout against our bedroom window, woke us all up, saved our lives. Another time, little junior was swimming in the creek and hit his head on a rock. The pig dove in, grabbed Junior by the trunks and hauled him out. A pig like that, you don’t eat ’em all at once.”