During the preceding months, innumerable small skirmishes have flared up. Typically they began as Mr. Squirrel was spied entering or exiting the building through one of the several unfinished eaves. This alone would not have riled the Squirrel Nemesis (SN) but accompanied by evidence that Mr. Squirrel was shredding the insulation in the roof and discarding it onto the lawn seemed to greatly annoy the SN.

The stakes were continually raised as the many doorways of Mr. Squirrel were removed, making it significantly more difficult for Mr. Squirrel to enter the residence. Despite the many attempts at exclusion, and to nobody's surprise, the devious Mr. Squirrel continually found new means of entry. Wood could be chewed through, vinyl flexed, and the tiniest of cracks presented ample opportunity. Today, due to unforeseen (on Mr. Squirrel's part) circumstances (the addition of F channel to the eaves) the furry little Mr. Squirrel was now unable to find his way back out.

This caused Mr. Squirrel much duress as he tried in vain to chew his way through the vinyl. Even more distressing was hearing his nemesis standing on the patio, laughing at him with a mildly gleeful smile. The war may not yet be over, but Mr. Squirrel was definitely feeling a little battle worn. The hostilities had been waged for quite some time but lately, the ability of Mr. Squirrel to freely enter and exit had been steadily declining. The two legged one seemed to have an entire arsenal of anti-squirrel devices at his disposal and he was holding nothing back. Through determination and cunning squirrel intellect, he had always managed to find a way back into the cozy nest he had grown accustomed to. Never before had getting out been such a problem.

After battling the impenetrable vinyl for some time, Mr. Squirrel picked another plan of attack. Since egress through the tiny crack through which he entered was nigh impossible, he began scouting about the house for another means of exit. As he entered an unfinished upstairs room, the sounds of his nemesis footsteps lighting up the stairs quickened his pace as he dashed about the room. For a brief moment, he paused at eye level, a mere two feet away, and stared down his adversary. The SN's eyes glanced at a nearby crowbar. Sensing the impending doom, Mr. Squirrel chattered something, almost certainly some form of squirrel cursing, and then darted away, retreating back into the rafters.

This day was becoming a bit more stressful for dear Mr. Squirrel. He took a brief rest as he calculated his next move. After all the eating noises of the two leggers ceased, he once again began his attempts to exit the rafters through the vinyl. Almost certainly the grins of his nemesis chilled his fur-clad body. After some time, Mr. Squirrel once again gave up on the vinyl and fell back to Plan B: scouting out the attic, searching for another way out. This was not a problem Mr. Squirrel had anticipated.

Unbeknownst to him, his scouting mission wasn't quite as stealthy as he had hoped. The Squirrel Nemesis had heard the delicate sound of squirrel toenails scampering across the wooden floor. The SN stealthily crept up the stairs, thankful that he had rebuilt the aged stair well and used glue on the steps to prevent them from squeaking. Outside the door to the room the SN donned a carefully located pair of leather gloves, placed there for just such an occasion. The door burst open, and there, Mr. Squirrel stood, face to ankles of the gigantic SN.

Mr. Squirrel saw light behind the SN and in a bold and daring move, rushed the SN in an attempt to dart out of the confines of the small room. The SN had anticipated such a move as the door finished slamming shut just as Mr. Squirrel's head reached the doorway. Crash! Somewhat dizzied by the door encounter, Mr. Squirrel changed direction and launched back across the room towards the window. Freedom was but a leap away but an invisible force, no doubt engineered by the Squirrel Nemesis was preventing his escape. Double toothed three toed squirrel curses were screamed out as the Squirrel Nemesis closed in.

Mr. Squirrel, being somewhat clever now realized he had been fooled by the light and crossed that off his list of escape routes. With the SN closing in, a new plan of escape was needed. A small crack behind a sheet of drywall was spied and in a flash, Mr. Squirrel darted into the protected alcove. As he rested, contemplating his next move, the Squirrel Nemesis appeared, inches away! Feeling quite vulnerable, Mr. Squirrel darted down to the other end of the drywall and raced out of the hideout.

Apparently, the Squirrel Nemesis knew exactly where he was headed as he was rapidly closing in. Seeing no other way to escape the SN, the only path to safely was to abandon the search for freedom and retreat back to the attic. A quick dart across the room to the wall, up the wall, and into the rafters would put him back into the safety of his nest from were his next move could be plotted. Mr. Squirrel began his retreat in a mad dash across the room. The plan was a good one, but Mr. Squirrel made a minor calculation error.

Unlike the cats and other enemies he routinely escaped from, the Squirrel Nemesis had arms already at the height that would put him safely out of the reach of dogs, and several paces ahead of even the fastest cats. He darted across the room, and as he ran up the wall, a gigantic leather clad hand struck out and barely missed his body, pinning his tail to the wall! The upward progress of Mr. Squirrel came to an abrupt halt. Before he could turn and bite at the hand that was impeding him, the strategic consequences of Mr. Squirrels miscalculation came into full play. The Squirrel Nemesis had two hands!

The second hand came down immediately behind Mr. Squirrel's head, grasping him firmly about the back of the neck. To Mr. Squirrel, this was a rather odd feeling. It was vaguely similar to how mommy squirrel used to grab him as she hauled him from the nest to teach him important squirrel lessons. It was every bit as debilitating but this time it seemed a little more like complete and utter surrender was more in order than simple submission. Having battled so valiantly up to this moment, Mr. Squirrel gave one last attempt to claw his way to freedom. In discovering just how firmly his body was trapped, Mr. Squirrel recognized defeat and ceased to struggle.

It was a strange feeling. The SN wasn't hurting him in any way, but he certainly wasn't providing him with any opportunity to find the much sought after freedom or escape that Mr. Squirrel was longing for. Mr. Squirrel found himself once again staring into the eyes of his nemesis. The adrenalin rush of the battle subsided and fear settled in.

Mr. Squirrel was bound and imprisoned, awaiting transport to an internment camp on Guantanamo Bay. During transport, a freak accident occurred and Mr. Squirrel's fell overboard. His remains have not been discovered. Mr. Squirrels family is suing the SN's estate for criminal negligence and reckless homicide. They claim Mr. Squirrel's transport ship was purposefully deficient, consisting of only an empty (save for one peanut) glass Planters peanut jar being towed by a strand of fishing line tied to a turtles tail.

Mr. Squirrel was transported by prison bus to the penal colony at 7482 Cook Road and released in the basement to live the duration of his life with the other four leggeds currently interred there who are grossly overfed by the current prison Matron.

The tribunal finds Mr Squirrel not guilty due to his inability to understand what it was he did wrong. However, Mr. Squirrel must be prevented from incurring damage to the home of SN. Therefore, SN is directed to take Mr. Squirrel for a long walk to the park on the West side of town and to release him into the wilds where his fate will be decided by his own survival abilities. Thus returning peace and tranquility to the land.

Especially if the release is a fast ball aimed at a large oak from close range.

The Squirrel Nemesis, having a voracious appetite, opted to have Mr. Squirrel for dinner and settle the matter with some rice and a good mushroom gravy.

This photo is a likeness only. Actual photos are concealed to protect the identify of the accused. 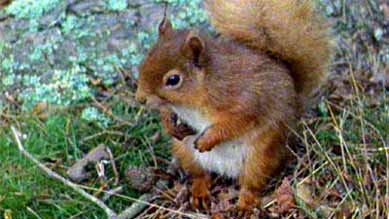 The Man Song The Woman Song Cat's in the Kettle